Large rubbish bags and gloves will be available from the toilet block any time after 3pm on Saturday 30th March. If you do not bring the full bags and other rubbish back to the reserve, please leave them above the high tide mark on the beach where they will be collected.

Please be aware there is a TOTAL FIRE BAN which means no open fires, fireworks, bonfires nor braziers allowed at all.

LETS ALL KEEP WAIKAWA BEACH SAFE FOR US ALL

MID WINTER GET TOGETHER

We will be having a games afternoon and pot luck afternoon tea to be held on Sunday 2nd June at 2pm, at the Manakau Bowling & Sports Club, Mokena Kohere St, Manakau. More details later.

BURGLARS ARE ACTIVE IN THE AREA

A four wheel drive vehicle was stolen from a property in Strathnaver Drive 2 weeks ago. Make sure all your property is secured and inform the police of any suspicious activities

We are compiling a wish list of any work or other activity that you think might enhance Waikawa. Please let us know.

John Hewitson — Chairman — I am a retired registered electrician who has lived at the beach for approx 13 years. I am at present the chairperson of the WBRA and the neighbourhood watch person for Cathryn Street and surrounding area. For recreation I play 18 hole golf and are a member of the Levin Golf Club.

John Brown — Secretary Had never heard of Waikawa Beach before 2000 but was introduced to it by our daughter who was camping at “tent city” and within the month we had bought a house two doors away. We live in an apartment above Point Jerningham Wellington but spend about half our time at the beach. I retired in 2001 after 47 years connected with ships and shipping as a deck officer, Wellington Harbour Pilot and Cook Strait rail ferry captain. I still work on ships as one of the few ship compass adjusters in New Zealand.

Elaine White — Treasurer My husband and I have had a holiday house in Waikawa for 2 years. I lived by the beach when young and have finally come back to having time at the beach. I have my own accounting practise in Lower Hutt.

Julie Stichbury — newsletters After holidaying at Waikawa for 5 years I moved here late 2009. I work part time in Paraparaumu and spend my spare time walking my dog, swimming and boogie boarding at the beach, drawing and watercolour painting and playing lawn bowls.

Frank Averes Holiday maker here since 1970; living here the last few years. Still wishes the subdivisions back in 1972/3 never happened. Been on the Ratepayer’s committee for a few years now. Keyholder for the boat ramp; places water-quality notices on the noticeboard; takes care of neighbourhood watch here at Waikawa.

Brent Hayden Brent & Eve Hayden have had their James St holiday home for 10 years. They live and work in Wellington and enjoy the opportunity to escape to a quieter lifestyle with weather that is consistently better than in Wellington. Kontiki fishing has been a recent addition to beach activities and Brent would love to spend more time on the river during the whitebait season.

Liz Duncan Peter and I have owned our house in Manga Pirau for over 15 years. We use to spend the school holidays there with our two boys (Jeremy and Kris), but since they are no longer at school we can only do weekends. Our normal residence is in Belmont, Lower Hutt. I have been a member of the committee for over 10 years. We love spending time at the beach and enjoy all the activities that happen over the Christmas break

Lesley-Anne Walker — Our family have been here at Waikawa a long long time.

I am one of the committee members always doing the BBQ at Boat race Day and the Sports Day.

I am married to Richard whose parents, Irene and George Walker, bought one of the very first sections to be subdivided over 50 years ago when the Drake family began to sell off pieces of their farm — back in the gravel road days.

Richards sister and her husband have a bach here and our 2 boys have one as well — the Walker family all love Waikawa.!

In 1979 Richard and I built our house here and were soon permanent weekenders travelling from Wellington until 1987 when we came to live here full time. Our boys went to Manakau School and quickly became country kids. We bought a farm here a few years ago which we run ourselves but still have business commitments in Wellington. Life is very busy for us.

As far as hobbies and interests go there is not a lot of spare time but I really do enjoy skiing in the winter and going fishing out from the Waikawa beach in the summer.

I absolutely love Waikawa and feel so happy it seems not to have had the changes that so many beach settlements have had over the years with developments etc.

Some history from Bob Edmiston

This was received from Bob Edmiston recently.

We have been coming to Waikawa since the late 1950’s probably 59 I think. We use to camp on the ground now occupied by the reserve and the changing sheds, before the formation of Manga Pirau Street. We got our water from the old bore and milk from Tony Drake at the farm.

Prior to that, my dad Doug was involved in the live gun shooting at Waikawa Beach, as part of his military training during the Second World War. I believe a shell was found recently on someone’s property in Sarah Street. Their training involved shooting at targets towed by planes down the coast. Rumour has it that the pilots were not at all impressed with their accuracy, as the gunners had a habit of missing, not behind the target but in front, thus cutting the tow wire. A bit too close for comfort.

So our old family’s connection with Waikawa goes back to the 1940’s. Five generations of our family have enjoyed holidays at Waikawa Beach. 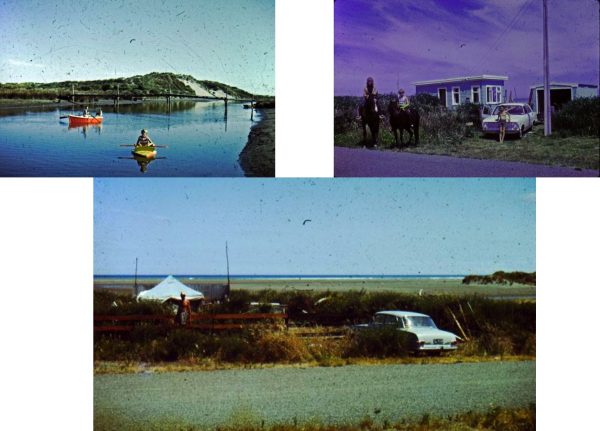 Ever wondered how the Hank Edwards Reserve got its’ name? This piece was written by Bruce Kelly.

Hank Edwards, Secretary of Waikawa Beach Ratepayers Association virtually since its’ inception 20 years ago, died suddenly on 15th October 1993. His passing came as a tremendous shock to all who knew him.

The names Hank Edwards and Waikawa Beach have been synonymous. At an Association AGM some years ago, when accepting nomination as Secretary for yet another year he said “I love this place”. The beach was his domain since his boyhood days and his enthusiasm for it was infectious, touching, if not involving us all in some way.

Over the years he acquired an impressive knowledge of its history, unique environment, flora and fauna which gave him and the association a valuable background when considering various projects. Examples are the range of planting initiatives — trees, maram grass and spinafex to control sand drift into the river both north and south of, as well as across the face of the settlement. As well there were the plantings on the street berms. Control of the river itself was a major interest of Hank, as were the reserves, and access to the beach. He was the driving force behind getting the decision to build the new bridge. This is a shining example of Hank’s energy, commitment and negotiating skills. Safety at Waikawa was always uppermost in his mind — the need for suitably placed street lights and traffic safety; the need for care on the beach and in the water, and the need for requisite signs. The above is but a thumbnail outline of the results of continuous letters, telephone calls and approaches Hank made on the association’s behalf to official quarters and others over many years, often at his own expense.

On a personal lever Hank was the fulcrum of the associations AGM and its subsequent social hour. He led the organisation of the Boat Race and from time to time initiated other informal gatherings over the Christmas holiday period. An essential component of calling the troops to the AGM was attaching a p.a. system to his car and driving along the streets announcing in that well modulated voice “Annual meeting of WBRA is being held in Blue Skies garage at 4pm, bring something to drink, something to drink out of and something to sit on”. Over the years he donated many of the prizes for the children’s events at the Boat Race. These were instances of Hank’s keenness to bring the beach community together during the holiday period and of his meticulous yet unobtrusive organisation.

Hank gave unsparingly of himself in the interests and welfare of others and expected nothing in return. Over the years his diplomacy and perseverance earned an enviable respect from then local authorities of the day. He also developed a very positive and continuing rapport with landholders in the vicinity of the beach settlement. The resultant works undertaken are in large measure due to Hank’s acumen. 1993 he was invited to join the District Council’s Operations and Services Committee in his own right. He was a valued member of the Courtenay Place Rotary Club.

Hank’s funeral was held on Tuesday 19 October 1993. The spacious All Saints Church in Haitaitai was filled to overflowing. Themes reiterated during the service were his honesty, sincerity, sense of fellowship and goodwill to others. Thoroughness in all he undertook on behalf of others, and his lifelong friendships. The thoughts of everyone were with his mother Florence, who with her late husband first introduced Hank to Waikawa as a young lad all those years ago She has been a stalwart of the beach community ever since.

On warm summery days Hank stripped to the waist in beach shorts and jandals, seemed to be oblivious to admonitions about the ozone layer. His tan was impressive. Often early on such afternoon his tanned figure, adorned with beach cap, unbuttoned flapping shirt and small haversack would be seen striding purposefully across the beach towards the sea prompting the comment “there goes Hank”.

You are reminded that you have not paid this year’s subscription. Two payments of $50 were deposited in our account with no identification on 28 February and another on 13 March with the only identification a Levin phone number on 13 March. One of these might be you. Please let us know.

If this is posted to you, it may be the last unless we receive a note that we are reaching the right address and hopefully will receive a subscription from you.

Many thanks to those who contributed to this newsletter