I trust you are all keeping warm and dry. So far the winter weather has been a real mixture — bright sun and frosty mornings for a day or two then back to dreary grey weather.

There have been big changes at the river mouth. The river wends it’s way south almost like it used to before HDC did it’s latest river cut — the whitebaiters will be happy. Sea birds are enjoying the change and seem to be hunting in the weed that is lying around like massive rolls of felt. A lot of the weed has now been covered by sand. Also there are lots of horse mussel shells around the high tide mark — obviously a tasty treat for the birds 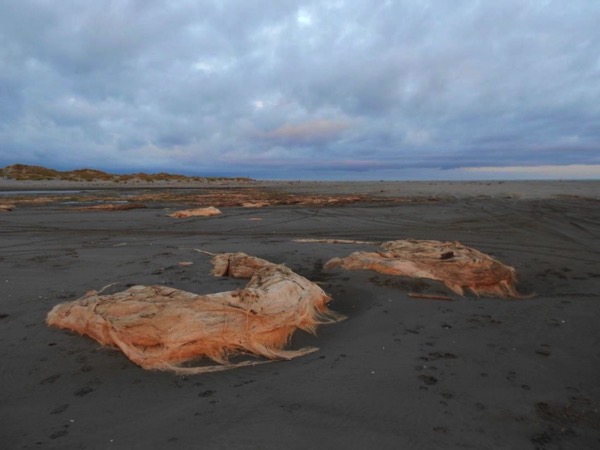 Weed mats on the beach.

This year marks the 40th anniversary of the formation and very first meeting of the Waikawa Beach Ratepayers Association.

I’ve been reading through old minute folders and they make very interesting reading.

On 31st August 1974 at 2.30 a group of 27 rate paying residents, (the actual wording in the Minutes was: Present: 27 Ratepaying residents whose names are attached herewith, some of whom were accompanied by their wives or friends. ) met at Mr Howard Hurn’s property in Drake Street to discuss forming an association. The outcome of this meeting was the Waikawa Beach Ratepayers Association.

The first committee was composed of the men who did most of the work in setting up the association — Messers K Dalzell, H Hurn, N Hewitt, J Briggs, C McKie, R Stewart and S Calvert. As it was decided at the set up meeting that the committee be made up of 12 members 5 other people were also elected, Messers EG Webb, PN Edwards, A MacKay, W Robinson and ML Hanlon.

The annual subs were $5. At the meeting a committee was formed and which met afterwards. The following was taken from the Minutes of the first meeting of the WBRA.

The Aims of the Association

The suggestion of the interim Committee that the aims be:

a) To preserve the environmental assets of the area

b) To develop the recreational facilities

c) To protect the interests of the ratepayers

1) The protection of the river

2) Installation of some form of fire protection

3) The general collection of rubbish

4) Investigate the possibilities of general improvements to the beach area

5) Investigate what measures could be taken to improve the safety of children i.e. the

6) The installation of a public telephone.

The following were agreed

Not much has changed over 40 years — the aims and objectives of the association are still to preserve and protect our part of the world. We do now have a weekly rubbish collection — this took years of work, with numerous meetings with HDC. The tip used to be off the main highway just over the Manakau Rail Bridge, south of Tatum Park.

It was decided to couch a reply to the County Council concerning the rubbish problem in the following terms. That because of the extremely good weather during the holiday period the number of day trippers was inordinately large, that we cannot police their rubbish dumping methods and to ensure that rubbish does not get scattered around the area, that we again request the County for permission to build a stand on which to mount the drums. We will also make available during the Christmas holiday period a mini dump bin to cater for the over flow, this to be at the Association’s expense.

By November 1978 the tip was opening at weekends, thanks to the Manakau Township Association Inc who added their weight to WBRA’s requests.

It is noted that the local tip is now open Fridays, Saturdays, Sundays and Mondays, between the hours 8am and 4pm. We should note that the bottle rubbish collection fortnightly, is now discontinued. The two junk collections per annum will continue by advice direct from HCC.

Finally, in the minutes of 24 October 1987 committee meeting:

A public notice in the Press was received giving notice that the Manakau Refuse Tip will be closed from 30th November 1987. It was noted that the County had received further complaints about its operation and as there was now a bagged collection, this was the opportunity to close the tip finally.

Rubbish dumped at the river.

There has been more rubbish dumped at the river. What astonishes me is the culprits have to go past a perfectly adequate rubbish bin to dump their filth on the sand by the river. Unfortunately the wind and rain over late May has spread the junk over a wide area and local dogs are having a field day sniffing around the food scraps. There have also been more dumpings of green waste. The mind boggles!

This latest dumping, pictured, happened on the weekend 28/29 June. Someone must know the culprit. Rubbish bags aren’t that expensive, this is at least 2-3 bags’ full. Please stop your revolting behavior now!

The Associaton also worked very hard for 18 years to get a public telephone booth at the beach. From AGM minutes of 1980:

Representations have been made on three occasions to the Levin Postmaster to provide us with a public telephone. He forwarded our request through his district office in Palmerston North, but it was not granted due, it was stated, to lack of funds and equipment . However we will keep trying as we feel it is very necessary that we should have a public phone in the area.

Continued requests by your Association and Council have proved fruitless in obtaining a public Telephone. Even the pleas of our local MP have been turned down.

The committee continued to request a public telephone but by 1992 these requests had been finally and permanently declined by Telecom and no phone booth was ever established at Waikawa Beach. By 1992 many people had either a car phone or a cell phone so the phone booth was no longer deemed a necessity.

Bikes in the dunes

A big thank you to the person who put up a sign at the south end of the billabong in the dunes to hopefully put off motor bike riders in the sand hills. On the weekend of 14th June there were an alarming number of tyre tracks in the sand hills so someone erected the sign in the photograph below. The sign says they have filmed the riders and for them to go away and let their friends know that this behavior is not acceptable at Waikawa Beach, if they want to ride bikes to do it on the beach not the dunes. Unfortunately by Friday 20th the sign had gone. 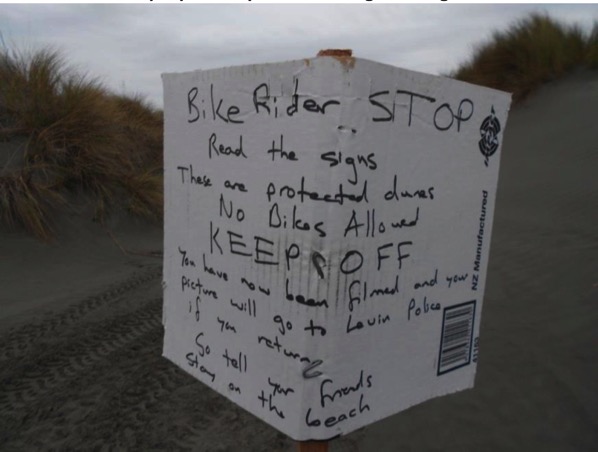 Rubbish Bags Blowing in the Wind

We had some days with very strong winds around mid June and we were reminded of the importance of rubbish platforms. Until dog owning residents choose to keep their gates shut we will have the problem of wandering dogs tearing up rubbish bags left on the road side. It’s not very pleasant waking up to find someone else’s rubbish blowing up the driveway and all over the property. So if you leave the beach before Monday morning please place your rubbish bag on a platform. If you do not have one please ask a neighbour — there are 2 near me which are rarely used and most streets have one or two.

A huge thank you to the members who contributed photos and information for this newsletter.