Winter is almost here, it’s getting dark so early these nights. But it’s great to have rain filling up our tanks, however arriving during Easter and the school holidays was bad timing.

Burned by the river

This morning (May 6th) I was walking my dog by the river and discovered a revolting mess. So… to the lazy, cat owning, smoker slob who felt it was ok to dump their rubbish by the river then try to burn it, believe me it is not ok!!! Anyone who knows the Horizon smoker who buys cheap Budget cat food and doesn’t like corn cobs, please tell them that this behaviour is disgusting and totally unacceptable. 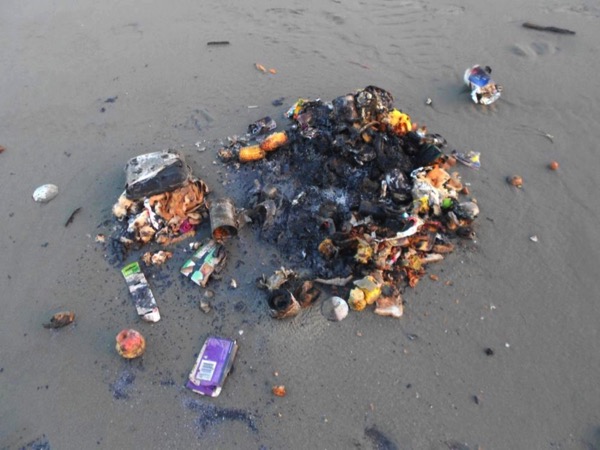 Burned rubbish by the river.

Just a reminder, the local council provides us with both a recycling and rubbish collection every Monday morning. Have your rubbish at the kerb by 7.30am on a Monday and it will be collected for you. Official HDC bags are available from the council building and also from local supermarkets. If you do not have a recycling bin ring HDC and they will deliver one to your property.

They cooked on the wood stove and lit the bach with kerosene lamps and candles until electricity arrived c1956. The toilet was an outhouse that “…provided great compost for Miss Leota’s leeks, peas and cabbages.” Water was obtained from a rainwater tank that houses a meat safe underneath.

Hank would pitch his tent beside the bach at the end of the school year and live in it until he had to return to school. He kept occupied swimming, walking the beach, looking at birds and their nests, digging for toheroas and catching whitebait.

With Ray Drake he hunted rabbit, pheasant and duck and fished from Ray’s boat. He remembered snapper tails flapping upright out of the water at low tide on a calm day as they buried their heads in the sand munching on Tua Tua. Also with a net dragging for flounder and netting snapper. From a boat, with hand lines and later a rod and later still 100 hook set lines bringing home snapper, gurnard, kahawai, shark and more. As late as the 1960’s 15–20lb snapper were regularly caught in the nets while dragging for flounder.

During the 1950’s, the total population over the summer months was about 50 — the Drakes, bach owners, campers and day trippers. In 1957 the Drakes subdivided the farm and gave the Edwards first choice of a section. The payment of £215 each for 2 sections made father a Run holder. The title to the property took years — final approval of the plan, realigning of the road saw a re-survey and the purchase of another piece of land finally gave title. Plans for development were talked of, changed, talked of again, and finally action. The passing road grader was encouraged by a couple of bottles of Red Band to drive the grader ‘up here’. So the drive was formed. A dozer came and flattened the hill top where the house now stands

On this property, the Edwards built the house they called ‘Blue Skies’. Hank did not write of the years of holidays in the house but he was still using it for weekends and holidays when he died in 1993. During these years he gained a broad knowledge of the wildlife, flora and fauna of the area as well as building up a collection of material on the history of the settlement which now resides with the WBRA. The reserve at the end of Waikawa Beach Road is named in his honour.

Have fun, keep warm and dry and PLEASE be responsible with your rubbish so our beach stays clean and safe for all residents, holiday makers and day trippers.