Happy New Year to you all! I hope you all had a happy and safe holiday. It was lovely to see Donna and her horse MD (Doc) festively dressed and handing out sweets to the locals before Christmas.

After a wet start the festive season was busy with holidaymakers enjoying the bright sunshine and warm weather. Our fun days were well attended thanks in part to the great weather, although it poured on the 18 holers and only 4 golfers finished the full 18.

Thanks to Ngaire, Frank and John H for their reports on the fun days and also thanks to the photographers:

29 players contested the Ambrose Golf on Friday 2nd January. The weather was good and the Levin course was in excellent condition. Refreshments and prize giving were held this year at the Clubhouse instead of returning to the beach.

24 players started out in initially fine conditions at Otaki on Tuesday 30 December. After a few holes the rain set in. Most carried on for a number of holes in very wet conditions. Players then slowly pulled out with only 4 brave souls making it to the finish line. This is the second year recently rain has affected play on the day, so we hope for better weather next year.

The scores were not great but the prized “trophy” was awarded to Peter Clarke with 32 stablefords. Second man was John Hewitson with 27.

Thanks to John Hewitson for organizing the golf, followed by prize giving and refreshments back at his house.

Spectators and some craft on Boat Day.

And come they did! All up, around 40 kayaks, a couple of dinghies, 3 rafts and a few flutter boards. Estimates are around 250-plus people including all the parental supporters and other onlookers. The usual raft of races followed, from flutter-boards and swims across the river; to all the age-range kayak races of various course lengths. As always, teenagers are noticeably absent; but there were plenty of willing parents to try their hand in the open-age races.

And as ever, sausages and drinks were on sale. The Walkers opted to trim a couple of trees to open the area up a bit — partly to the sausage sellers could see the action!

The grand-finale race, the all-in open race saw about 30 kayaks line up, with a two-horse race to the first marker. It then became a four-horse race up the field with one player pulling out, as the eventual first 3 place winners streaked away. Having a couple of dozen kayaks all reaching and trying to turn around the buoy at the same time leads to natural selection as the fittest succeed and the rest become a tangled mess of kayaks and paddles.

Worth special mention was the raft race, with just 3 entries. The grandest, the pink-bed-raft (complete with teddy bear) proved too buoyant for its crew of 4, and the inevitable capsize displaced all four in a flash. It proved more effective with just two on board, but by then the race was done.

The raft race start — hopefully this race has given people some good ideas and are already planning their rafts for next years’ event.

The weather was ideal for the running of all the events. There was a very big crowd which consisted of all ages. Participation was great from all age groups including some teenagers. There were the standard age group races followed by three legged races followed by leap frog for all ages then the day was finished off with egg and spoon races. Believe it or not there were still a few whole eggs at the finish. Because of the timing sausages did not sell very well but cool drinks were all gone. A lot of photos were taken and can be seen on the web site.

5 year olds lined up for their sack race.

had fewer entries than last year but the quality was still there. There were 27 entries but only one solo effort which was Kermit by a seven year old. Top entries were (not in order) Hippopotamus Farm, Octopus Garden, Waikawa Beach Map, Waikawa Express, Chopper The Crocodile, Horton Hears Squeak. A very good day finished off with 2 Big Digs for under and over 6 year olds.

Prizes donated by the Sheppard family and Motor Tech Lower Hutt were very well received. Photos of Sand Sculpture are on our web page.

Most of the old committee were re-elected. Councillor Christine Mitchell from HDC attended and spoke to the meeting. She said the Rating Review was a long term plan. There were anomalies with the present system such as farmers paying disproportionate rates compared to life-stylers and rates paid by utilities such as power companies. The review was put out for consultation amongst various groups and a full consultation process will take place this year and reminded us if we wished to be heard we must make a submission.

Several ratepayers asked questions regarding LIM reports and flooding. She said she was disappointed that LIM reports had contained information that she understood would not be included.

In answer to a question about the invasion of rabbits and the health risk posed by the numerous borrows in the road berm that was used in the absence of any footpaths she said it was an issue that should be directed at Horizons Regional Council. 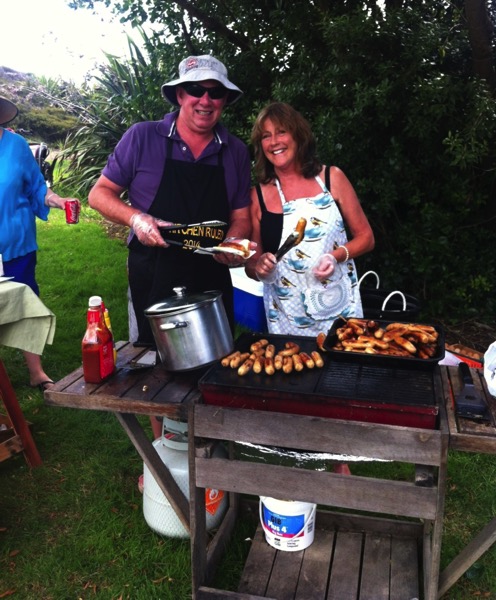 Waikawa Beach has featured quite a bit in the DominionPost, in the Pet of the Day and Summer Photo features and also a two great write ups on houses in Strathnaver in the Property section.

Unfortunately Waikawa Beach also featured in the tragic drowning of local man Spike Angove. Our sympathies go out to the Angove family.

School is back and the rains have arrived, great for gardens, lawns and water tanks.