I know it’s been a while since I sent out a newsletter but not a lot has happened over winter.

Please note that on Friday December 16th 2016 there will be an Australian Orienteering Training Camp on the private land across the bridge. This event will involve approximately 30 people and will last most of the day.

Please access the beach from the south for this day so as not to interfere with the training camp. Also please remember that the forest across the bridge is private land and we are very lucky to have access to it during the year.

The white baiting season is nearly over. Most people seem to be happy with their catches. The shags and spoonbills are enjoying feasting on the little fish that sneak past the nets.

Rabbits are running around everywhere, especially early evening and early morning. My cat is bringing baby rabbits inside to play with. Horizons will hopefully be dealing with this problem — the road side berms are a dangerous place to walk with little holes everywhere waiting to break your ankles.

When I lived at Paraparaumu Beach we were inundated with rabbits. WRC put down carrots laced with calicivirus through the sand hills. 12 years later, when I left the area, the rabbits numbers still had not come up to anywhere the problem we had before WRC stepped in.

The defibrillator has been moved to the front of the toilet block at Hank Edwards Reserve. The heat from the sun was damaging the battery so it had to be moved to a shadier place.

The river has changed so much over the last few months. It used to wend it way south but now has cut itself a channel opposite what is left of the walkway/driveway from James St. It also looks really clean so let’s hope it stays that way for the summer season.

Peter and Wendy are putting their Christmas lights up now and hope to have them ready to go on 5th December. Mind you with this wind they can’t do the roof lights til it calms down a bit. 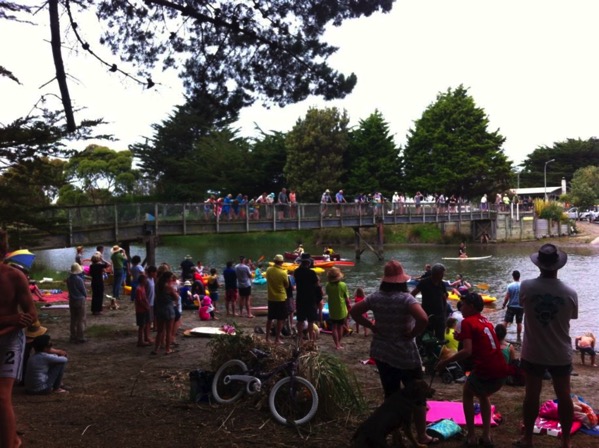 The weather has been insane lately. When we aren’t dealing with earthquakes and rain we get this typical gusty windy spring weather. The rain and warmer weather means our lawns are growing so fast Peter & Wendy can hardly keep up.

Tuesday 27th December AGM 3pm at the Hank Edwards Reserve. In the case of

inclement weather the AGM will be held in John Hewitson’s garage, 4 Cathryn Street

GET YOUR RAFTS READY FOR THE FAMOUS RAFT RACE

Wednesday 4th January 18 HOLE GOLF at Otaki Golf Club. This event will only be held if there are enough entries.

Teeing off at 10am so all golfers must be at Otaki Golf Club by 9.30 at latest

Sunday 22nd January SAND SCULPTURE COMPETITION. This is held across the bridge to the left. Judging begins at 3pm

Sunday 23rd January BIG DIG at 3.30 across the bridge to the left

Attached to this newsletter is a Form from the newly appointed Neighbourhood District Convenor for this area.

Although we maintain a database of members of our Association including contact phone numbers which is especially useful for weekenders, the newly formed District Neighbourhood Support Inc are keen to compile a database which will include all property owners in the district.

At our AGM to be held on Tuesday 27 December, Deborah will be in attendance and will speak to us on what they want to achieve. She will also receive competed forms. You will see on the form that she is trying to recruit street co-ordinators, can supply information packs and can put you on a list to receive updated information as it comes to hand. You are reminded that there have been a number of break-ins at the beach over the past year.

The following obituary has been supplied by the Walker Family in memory of Irene Walker who passed away last week. 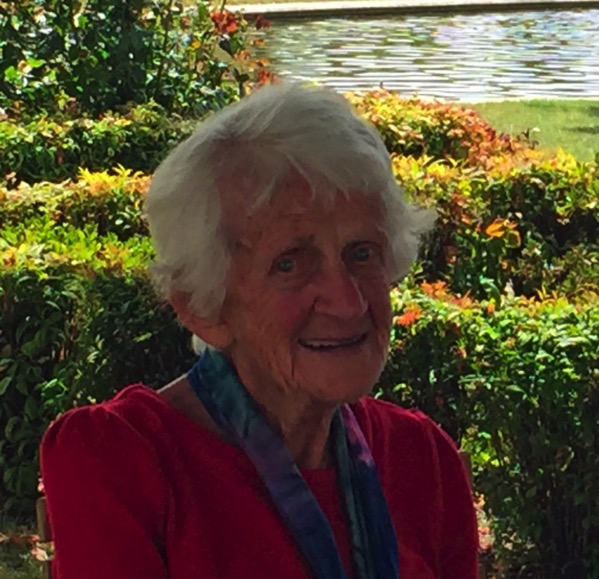 On 1 August, Waikawa’s oldest resident, IRENE WALKER turned 100 years old and celebrated with a fantastic party at Tatum Park, where the then Mayor, Brendon Duffy, presented her with a letter from the Queen. She didn’t get home till 2am and loved every single minute of it.

Irene and George Walker bought one of the earliest sections to be subdivided off the Drake family farm in the late 50’s and which the family still own.

Those were the days when there was a gravel road from Manakau and farm gates to open and close on the way to the beach. Fresh milk was obtained from Drake’s milking shed which was situated close to the present start of the village and over the years they witnessed many changes at Waikawa Beach.

They retired to live here permanently in 1974 and being keen gardeners successfully grew show chrysanthemums for some years.

George suffered from emphysema and when quad bikes became available they bought one which then allowed them to go down to the beach white baiting which was another of their passions. In usual white baiting fashion, if you asked how many they caught the answer would always be “barely enough for a fritter” — never tell anyone what you actually caught!

Interestingly George never had a driving license so Irene did all the driving. Her family called her the ‘silver streak’ and she kept the license until her 100th birthday, but sensibly eased out of the driver’s seat after that.

Sadly, George died in 1987, but Irene remained at Waikawa developing an interest in art and pottery, being talented in both.

She still rode her quad bike but recently traded up to an automatic bike as she didn’t have the strength to change the gears.

Many people would see her going for her daily walk to keep fit and only these last couple of months did she slow down and needed more little rests which enabled her to stop for a chat.

She attributed her long life to being lucky with health, eating well — cream on her porridge, fat on the meat and getting out as many days as she could for fresh air and a walk.

She will now be walking with George who has been waiting patiently for 29 years.

She was a wonderful, vibrant, interesting woman and will be sadly missed by family and friends.