How fast should people be allowed to drive along the beach? 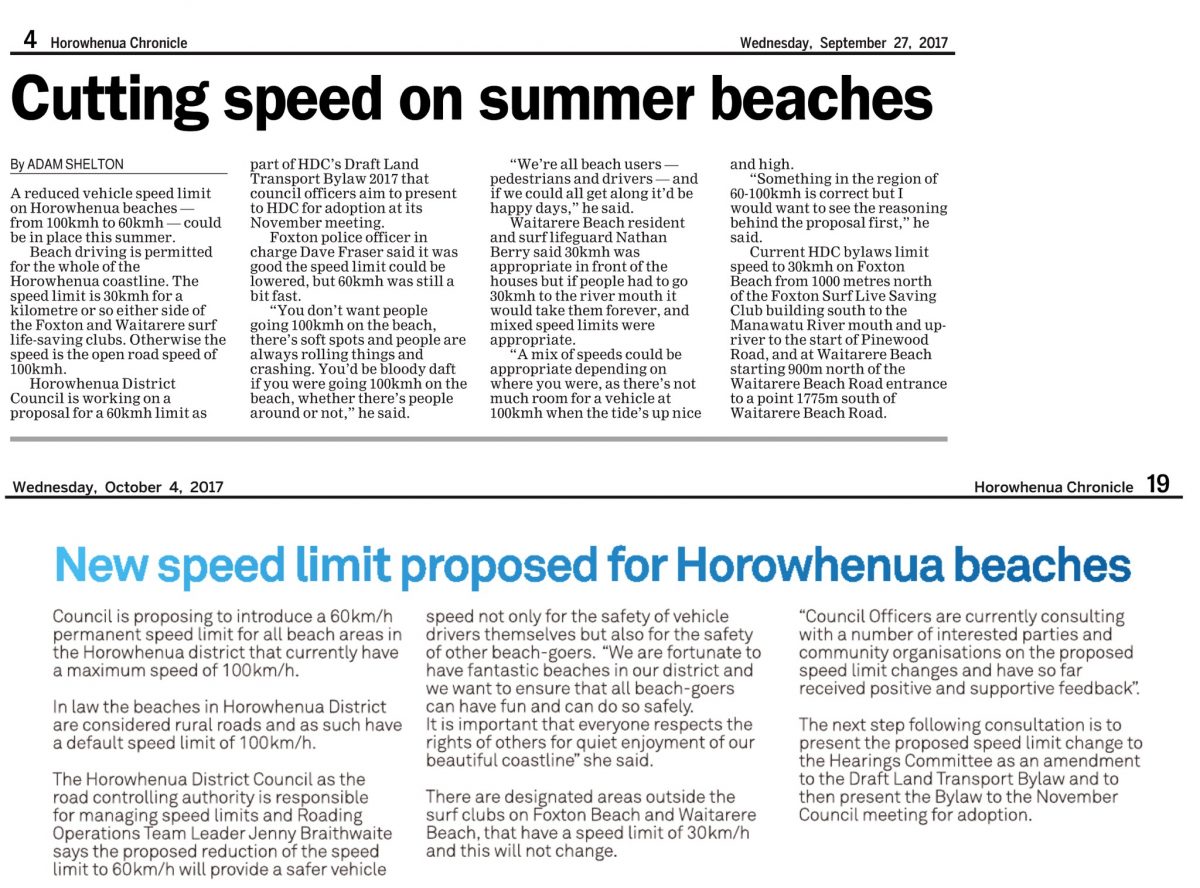 Our beach has become quite a busy place — along with birds and seals, we have children and adults walking or jogging, dogs and horses. Some folk fish with kontikis or in small boats, drawn by cars or tractors. Others collect shellfish or driftwood. Some even fly drones. There are those who bicycle to Otaki and back, and, of course, the whitebaiters, hunkering down in their utes or 4-wheel drives. Quad bikes abound, and motorbikes make an appearance too.

In Horowhenua the beaches are regarded as rural roads. And whereas you can drive at 100 Kph along the brand new multibillion dollar Expressway with its separated lanes, carefully cambered and marked surface, barriers, and all the other accomodations befitting a high-speed highway, the maximum speed limit along the beach here in Horowhenua is an eye-watering 100 Kph also.

Now the Horowhenua District Council are contemplating reducing that limit on the beach.

Their notion is to reduce it to 60 Kph. Waitarere Beach and Foxton Beach also have some special zones that are 30 Kph.

In neighbouring Kāpiti parts of the beach are not available to vehicles, and other parts, including the portion of beach that meets up with ours, have a 20 kph restriction.

The Horowhenua District Council invited the Waikawa Beach Ratepayers Association to consult on the proposed changes. After a productive meeting with Jenny Braithwaite, Roading Operations Team Leader, here’s what the Association submitted on Friday 6 October 2017:

Waikawa Beach has become more popular over the last few years. There are more permanent residents than there used to be and more owners are letting out their houses to casual visitors. There has also been quite a property and building boom, particularly in the Strathnaver area, and along Emma Drive and other roads nearby. That has led to an increase in contractors — builders, plumbers and so on — and in big trucks, such as those delivering shingle, concrete, diggers and large loads of building supplies.

The increase in permanent residents and casual visitors means a lot more adults and children, dogs and horses on the beach between the border with Kapiti District Council in the south — approximately in line with the end of Reay Mackay Grove — and an area roughly in line with the northernmost extent of the village in the north.

We would like to request a special speed zone for all areas of beach accessible by vehicle between the border with Kapiti and a line level with the northern extent of the village. We have marked the area on the attached map.

That extent of beach is also where we see numerous birds, including those that travel from the Arctic each year, and seal pups and adult seals in breeding season. Whitebaiters frequent the river mouth in season, and people fish, often from kontikis, all along the beach in summer.

Note: the Kapiti Coast District Council allows vehicles to drive north along the beach from the 8 Marine Parade, Otaki access point, but at speeds not in excess of 20 Kph.

We’d also like to record other roading issues we mentioned to you.

If you’re a resident or ratepayer here, what are your views on the maximum speeds for vehicles on the beach?

One thought on “Fast or slow: what’s the best speed for our beach?”