This Horowhenua Chronicle article from 04 October 1980 talks about how the 46 permanent residents like their peace and quiet.

Recently Lesley-Anne Walker found an old Horowhenua Chronicle article from 04 October 1980. Taking up nearly a full page, the article talks about how the 46 permanent residents enjoy their peace and quiet, but put up with holiday visitors.

Waikawa Beach residents — and there aren’t many of them — feel that during the week, the place belongs to them.

It’s a strange feeling wandering around the streets on a weekday, when house after house is empty and locked up and scarcely a soul is in sight.

But the permanent residents of this small beach settlement a few miles from Manakau choose to live there because it is so quiet. They are mainly retired couples.

Only 14 houses are permanently occupied.

The inhabitants are often asked whether they find it lonely — but none do. They see a difference between aloneness and loneliness.

See the original article in the images below.

Update: Linda Lambess kindly typed out the whole article for us. Many thanks Linda!

Waikawa the way they want it.

Waikawa Beach residents — and there aren’t many of them — feel that during the week, the place belongs to them.

It’s a strange feeling wandering around the streets on a week day, when house after house is empty and locked up and scarcely a soul is in sight.

But the permanent residents of this small beach settlement a few miles from Manakau choose to live there because it is so quiet. They are mainly retired couples.

Only 14 houses are permanently occupied.

The inhabitants are often asked whether they find it lonely — but none do. They see a difference between a lone-ness and loneliness.

With miles of beach to walk, gardens to tend, houses to maintain or renovate, and time to devote to any hobby they choose, they’re a contented lot.

These few permanents have to accept quite a change over holiday periods. In summer the population of the beach and surrounding area (46 in the last census) increases more than tenfold.

“We like it when the holiday makers come in but we don’t mind it when they go,” said Mrs Coralie Hurn.

Another resident admits disliking the summer influx of people.

But Waikawa beach is not another Waikanae — and that’s the last thing its residents would want.

Many of them have come from the Wellington-Hutt area and deliberately by-passed the more southern beaches in their search for a retirement.

“This is the first decent beach out of Wellington that is purely recreational,” says Mr Howard Hurn, president of the Waikawa Beach Ratepayers Association. “Raumati, Paraparaumu and Waikanae are dormitory towns for wellington and retired permanents pay exorbitantly to live there.”

With more reasonable rates, and most of the facilities they need, the residents find freedom from the rat race — and that’s what most of them are after, Mr Hurn says.

The facilities at the beach no longer include a shop but for most locals this is not a problem. A trip to Levin or Otaki is an outing.

Now that petrol prices are higher, this is done less often and vegetable gardens and freezers come into the picture as money-saving devices.

The beach does have other amenities of concern to residents — water tanks for firefighting, rubbish bins on the beach front, street lighting (which has recently been supplemented), rubbish collection once a week, daily milk, paper and mail delivery.

The ratepayers association has taken up some of these issues with the rural district council, and gets full co-operation, according to Mr Hurn. The lack of a public telephone booth has been one issue that has seen no progress.

The phone box would serve in an emergency — Mr Hurn says there have been a number of fatalities over the years.

Immediate access to a phone is not always possible in the event of a swimming incident.

The association is a group of some 85 people, residents, “Weekenders” and some neighbouring farmers. The committee is active through the year, but the whole group only meets once a year.

Business is followed by a social gathering: a rare thing for the beach community, for the people prefer to “do their own thing”, in Mr Hurn’s words.

One continuing project is tree planting — and it was trees that got the association started. People were worried about erosion and loss of trees from the plantation on the sand dunes beside the Waikawa stream mouth.

They got together to put pressure on the Manawatu Catchment Board — but to no avail: Not enough money!

The association would like to see this land, which is still owned by the estate of the earliest farmer in the area, Mr Arthur Drake, made into a county or crown reserve.

The land is on the market, and one of the fears is that it could go into private hands. Mr Hurn says they’d hate to see that happen.

The land — which encases access to the beach via a bridge across the stream — is constantly used by the public.

Mr Hurn again: “It’s weathered a lot of invasion over the years and come up smiling.”

A rumour that Wellington trail bikers clubs could have the money to buy the land is not a welcome thought.

The Drake land was once a vast area of several thousand hectares. Much of it is now farmed in small units, but the 1974 subdivision for new housing came from original Drake land too.

This southern expanse of some 22 hectares is now dotted with the odd house, caravan, shed. Some sections are planted out with no sign of habitation yet.

There is a big demand for these sections, according to developer Mr R.I. Robertson. It’s one of the last places where sections are very close to a beach. Supply and demand will see prices rocketing in a few years, he reckons.

But Mr Robertson says the idea is not to make the place exclusive. Interest rates are reasonable — although mostly, repayment are required in five years and deposits are five percent of the total. ‘

The growing trend is for working families to buy up build and settle, commuting to Levin or Otaki. A few are already doing this.

Three quarters of the purchasers intend using their sections as holiday places through, but could well settle later.

The ratepayers association, through it wants ‘quiet growth’, could be happy to see all these built on.

It’s thought that through Semple’s interest, the road and the power went through promptly after the opening of the settlement in the 1930’s.

But even in the late 1950’s there was only the one street, Drake Street.

Growth has really only happened in the last ten years and does not seem likely to threaten the slow place and isolated way of life of the permanents.

2 Across the Waikawa stream and into the plantation that means of lot to the residents of Waikawa beach. Erosion has long been a concern — and the people want to see the land kept for public use.

Some planted out, some neglected, some with caravans, sheds or garages — with the dunes as a constant background. This is part of the scene in the slowly developing subdivision at Waikawa Beach.

1. Waikawa Beach: old and new. The small area near the top left of this aerial shot is the older established holiday homes and the stretch of developing subdivisions takes up the right half of the photograph.

Living in a sleepy hollow has its merits residents told staff reporter Ginny Lee when she went to look at Waikawa Beach into this the third of a series on Levin’s satellite communities. Mike Field took the pictures. 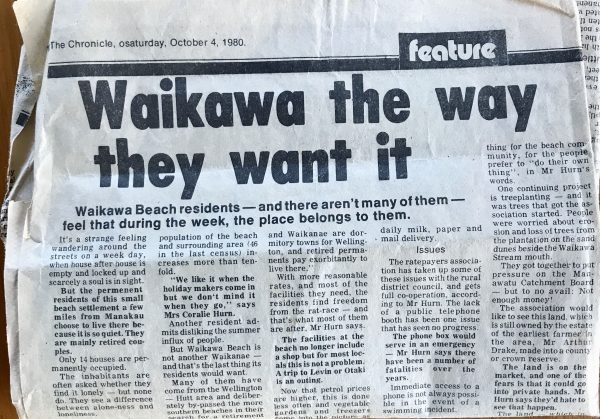 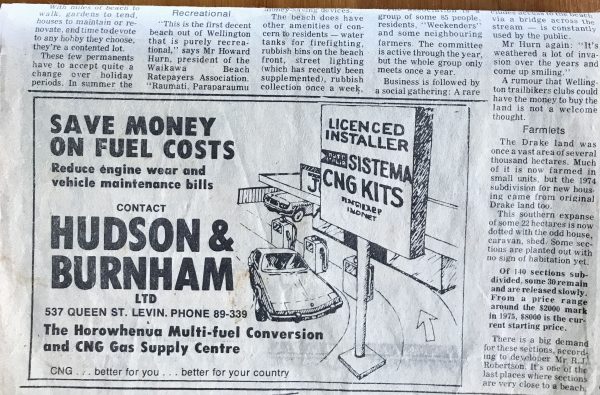 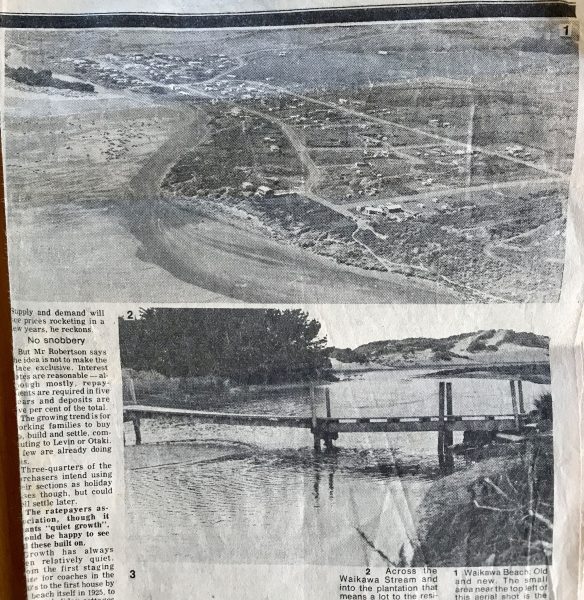 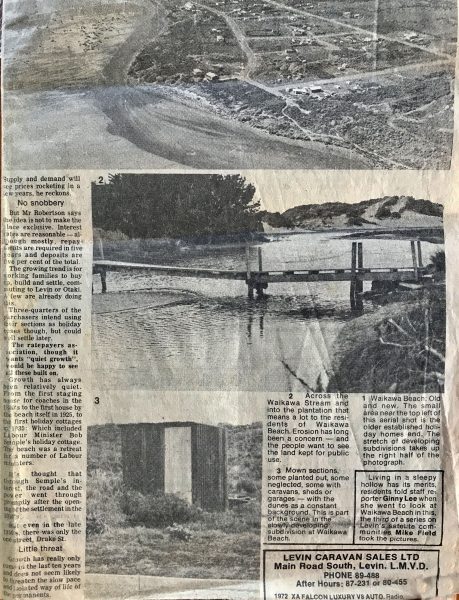