The Council wants to add 63 new housing lots to Waikawa Beach. Its discussions with landowners, land developers, estate agents and other interested parties have made it clear developers don’t want to pay for infrastructure so that cost will be passed to ratepayers. 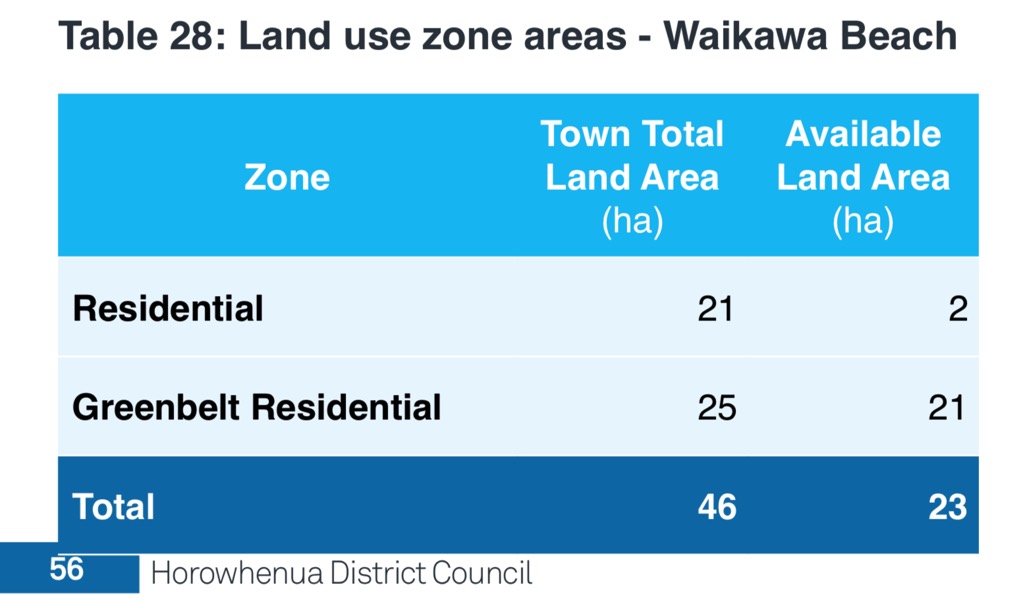 There are approximately 340 properties at Waikawa Beach, counting those you can reach after the speed sign at the entrance to the village. That excludes any reached by turning off Waikawa Beach Road before the village entrance. Here’s a map showing the properties, made from screenshots from the Horowhenua District Council’s online map. Click the map for a larger version. It shows the fairly dense residential area in the village and the bigger sections in the Strathnaver area.

Almost all the sections in the village have been built on. In the last 3 years or so there’s been a huge upswing in Strathnaver sections being sold and houses built. There are now very few sections anywhere left for sale, and a couple of them turn into lakes in prolonged wet weather anyway.

Every year a handful of properties in the village or nearby change hands.

It’s hard to assess how many people live here full-time, but a good guess would be between 150 and 200. See Will the Waikawa Beach population grow in the next 20 years? for more on this and a link to Stats NZ maps. The upcoming Census should be able to give us better figures by the end of 2018.

Horowhenua’s population has recently been growing more quickly than it used to. The Council now need to plan for future growth. The plan reckons on:

This information is contained in the Draft Horowhenua Growth Strategy 2040, 3 MB PDF.

It’s a document worth reading. Below I’ve drawn out portions of particular note.

The Council aims to spread the newcomers around, but believes the southern parts of the region will be most favoured, in part because of the new roads. The document includes maps and plans for various areas, including Waikawa Beach, where the Council believes 63 houses could be added — perhaps around 120 people (based on the approximate 2 people per household figure above). This could nearly double the number of people living here.

Flaws in the plan

On re-reading the Plan and compiling the extracts below a few things became obvious:

Here are some general comments about the whole of Horowhenua —

the impact on existing neighbourhoods needs to be managed, and [we must ensure] that transport connectivity from new areas to services and amenities is good.

The median age in Horowhenua is 46 compared to New Zealand as a whole which is 38 years of age.

There was a 30% increase in the number of unoccupied dwellings between 2001 and 2013, largely attributed to demand for holiday homes or second homes in beach settlements where people reside primarily during weekends and the summer months. This seasonal fluctuation of people living in the beach communities is not necessarily reflected in the available population statistics.

Then we start to get to some specifics for individual settlements. In this post we look only at Waikawa Beach.

urban growth can modify the established character of settlements that are cherished by the community.

The distribution of some projected growth in the beach communities in the southern part of the District (which are closer to Wellington) can also be anticipated if the highway generates increased accessibility.

Consideration will need to be given in the longer term to ensuring that the need for travel on strategic roads is reduced. This could be through the provision of community facilities, public spaces and shops in development areas, off the main highway, or construction of link roads that enable local traffic to move without using the State Highway network.

Note here the suggestion of introducing shops to development areas.

There is the potential to service expanded settlements with additional bores and extended reticulated systems. However, with increasing demand for groundwater from a range of users, water conservation initiatives also need to be considered. The costs of providing increase reticulation is an issue for the district.

An issue for settlements without wastewater infrastructure will be their capacity to accommodate any additional growth without sufficient lots sizes to enable onsite treatments (eg tanks and soakage). In addition, the cumulative impact of a number of on- site treatment and disposal systems on the quality of groundwater and surface water.

Greater consideration of the effects of climate change on sea levels and the effects on coastal areas including estuaries and river mouths will be required in considering further development at coastal settlements. Similarly more intense rainfall events can be expected which requires consideration for managing stormwater and also river flood hazard.

We need to remember that this area has a rich history of both Māori and European settlement before the 1950s.

The consultation has identified some deterrents to current landowners proceeding with enabling their land to be urbanised.

The costs to undertake subdivision and provide for infrastructure such as roads, services reticulation and its connection to the existing system.

Feedback from the consultation with landowners has informed the proposed growth areas that form part of the community consultation.

Some areas are potentially subject to natural hazards which provide significant risks associated with occupation of the land. These effects cannot easily be mitigated, so growth areas that avoid them are favoured over those that are affected. The influence of climate change on the nature of these hazards also needs to be considered.

Figure 11 shows two options, WB1 and WB2, that would provide sufficient land (see Table 17) to accommodate the projected demand in both Residential and Greenbelt Residential land, as well as providing additional capacity in the event that demand was higher than projected. In identifying these options, land that is subject to flooding or ponding has been avoided.

Page 56 talks about the current status of Waikawa Beach:

Recent development of a lower rural-residential density has occurred to the south of the settlement. The urban area has extended along the eastern side of the Waikawa Stream.