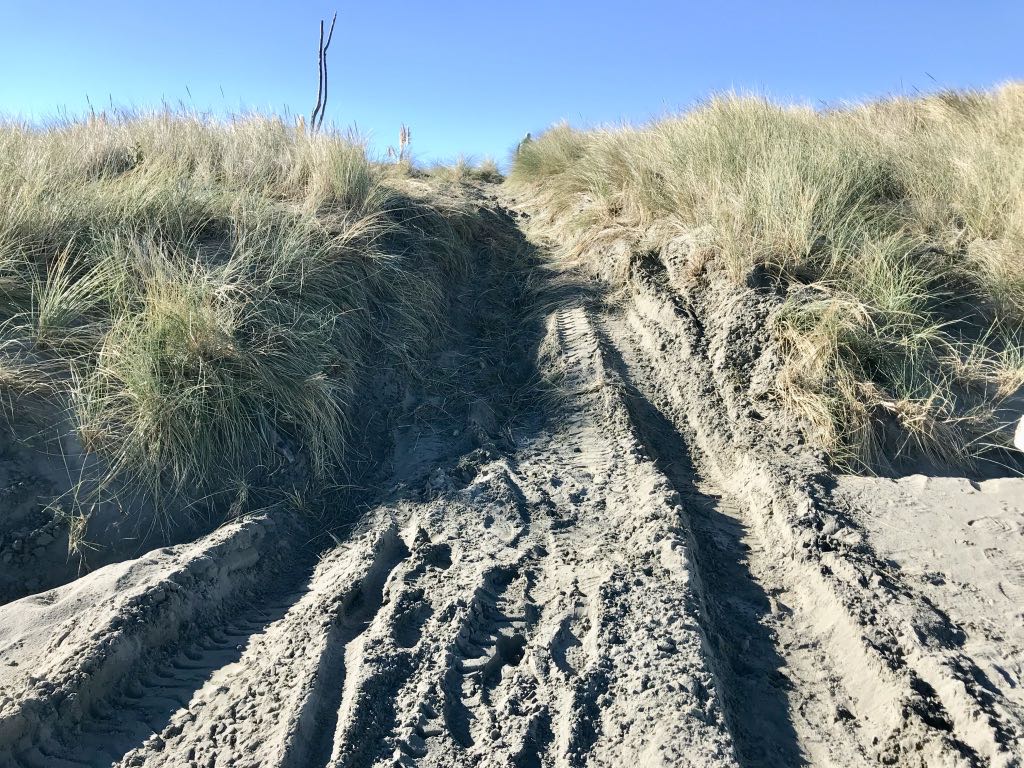 To the consternation and dismay of locals, on the weekend of 14 and 15 April 2018 a ute and 4 quad bikes tore up the two walking tracks to the beach off Reay Mackay Grove (vehicles are forbidden on those tracks). They also hooned around in the dunes and churned up part of a private property.

At the north track off Reay Mackay Grove they’d pulled up several posts at the beach end that hold tape to discourage people from entering the dunes and driven on sand banks, breaking them down.

At the south track they entered through private property to avoid the bollards designed to keep vehicles out, churned up the track and went off-track into the dunes where they drove around. At the beach end of the track they moved a large piece of driftwood that was in their way.

Note: the white car in the photo belongs to a visitor to the beach at the time the photo was taken.

At some point along the track they also got stuck, as a photo provided by a neighbour shows.

The beach end of the track shows how they drove vehicles on and off the walking path, leaving deep trenches in the beach.

Ultimately the ute and quad bikes departed the beach through the river.

Locals were disturbed by the fact that these vehicles had entered the dune area and driven round there, crossed (and damaged) private property to get into the dunes and shown reckless disregard for the environment and for other people using the tracks. One neighbour was also concerned that they had entered a different private property, at night, causing alarm.

It’s one thing to drive along the beach, with due caution around people, dogs, horses, seals and birds. It’s another to hoon around en masse in the dunes and tear up walking tracks.

If you know those responsible please have a chat to them and ask them not to return.

3 thoughts on “Hoons in the dunes”