The photo below was contributed by Kevin Burns who remembers using the bridge back in the 60s. Photo date and other details unknown.

29 March 2008: Long I remember this old bridge; jumping in the river from it (there was always a hole around its western pier). And oh the sping in the bridge!

The spring tides that rendered the bridge uncrossable in dry feet (you could kayak around it!) 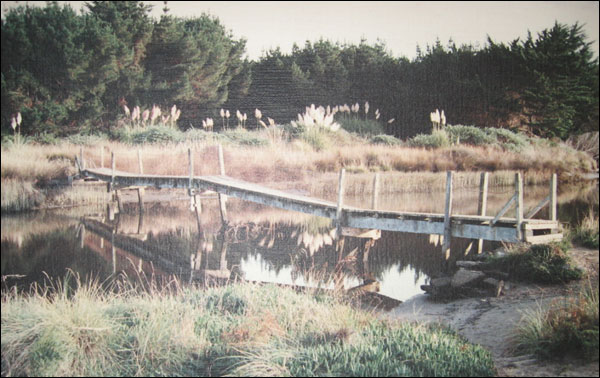 Actually, this photo is a bit misleading — there was an extra plank length in place of the steps shown; ay them woz the days!

This bridge is immortalised in a stained glass window in my place.

11 December 2013: After the bridge was washed away. The Ratepayers Association put a lot of pressure on the Council to replace the bridge and a replacement further downstream was opened in January 1992.


The footbridge now. See How our footbridge is connnected to the Auckland Harbour Bridge for information about its construction.

The footbridge was refurbished in July 2018. The work took about two weeks. Strapping was laid across the deck, new handrails were attached, with an additional rail at the bottom, and plastic anti-slip mesh was laid over the strapping. Plastic was used so people could still walk across the bridge barefoot in summer. The bridge is now a lot more stable.